Burrows Smith Honored as 2019 Hall of Fame Inductee for WCFHBA

Posted on: May 9th, 2019 Posted in Community News, Sustainability

On Friday, May 3rd Burrows Smith, Developer and Managing partner of River Bluffs was honored for his development efforts over the last 39 years by the Wilmington Cape Fear Home Builders Association (WCFHBA). Burrows was inducted into the 2019 Hall Of Fame and commended for his unique and environmentally sound concepts and proactive involvement in conservation efforts to preserve the natural surroundings that contribute to the quality of life for those living in southeastern North Carolina. 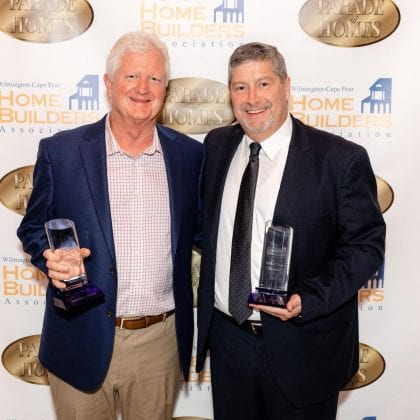 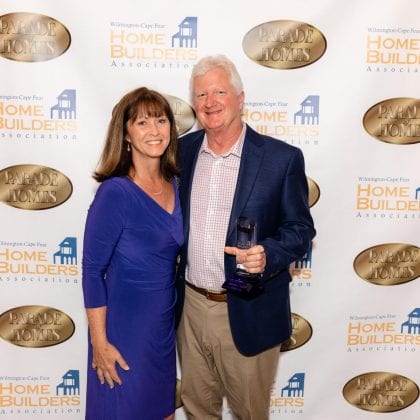 River Bluffs is a new-home community that many are calling a gem in the rough. The community is truly one a kind and the development concept is simple, utilize the attributes of the land. Using this concept, Burrows has created River Bluffs, a 315+ acre development located on the North East Cape Fear River. The community respects the significant environmental features and resources that were found on the land before breaking ground on the residential development and uses them to his advantage to create one of the most environmentally sound developments in the greater Wilmington, NC area. Burrows is a unique developer that can take a set of plans, walk every mile of planned roads, never hesitating to move a roadway or a utility manhole to protect specimen trees or unique natural amenities.

These conservation efforts have not gone unnoticed. In 2014, Burrows and the River Bluffs team were awarded the Pelican Award, which is one of the highest honors from the Coastal Federation. In 2015 River Bluffs was acknowledged by the Lower Cape Fear Stewardship Development Coalition and received one of its highest honors – The Outstanding Recognition Award. These prestigious awards are verification of what Burrows calls “development done right”.

A Look at the River Bluffs Development Concept

Burrows Smith grew up on Wrightsville Beach, and his life along our waterways has left him with a meaningful passion for conservation and an appreciation of how the protection of our natural surroundings contribute to the quality of life we all enjoy in southeastern North Carolina.

At a very early age, Burrows developed the fishing bug. While fishing with his father, they would set nets along the Intracoastal Waterway; catching spot and mullet and could routinely be found flounder gigging. Around 1990 a gentleman by the name of Ralph White took Burrows deep sea fishing for the first time, and the hook was set for his new passion, hunting Blue Marlin.Â  For over 25+ years Burrows has fished out of local and foreign ports in pursuit of Mahi, Wahoo and Blue Marlin. He has been a staple at one of the largest, renowned Marlin tournaments around – The Big Rock. For many years, Burrows has fished this tournament and in 2014 came in 2nd place in the Big Rock Tournament weighing in a 606-pound Blue Marlin.

Never one to be a passive enthusiast, Burrows became an active board member of the Coastal Conservation Association, an organization dedicated to advising and educating the public on the importance of conserving our marine resources. Burrows also served on the North Carolina Marine Fisheries Board. This passion for the ocean, our waterways and the environment overall has played a pivotal role in his development style.

Burrows graduated from New Hanover High School in 1976 and then attended the University of North Carolina at Chapel Hill, graduating in 1980 with a business degree. After graduating Burrows set out with a dump truck and a few tools and formed Burrows Smith Construction. In 1988, he merged with A.C. Skinner to form Skinner-Smith Construction, specializing in construction, infrastructure installation, grading, paving and utility work for new subdivisions in New Hanover County. Some of his notable projects include Masonboro Landing, Masonboro Forest, Cove Point, Porters Neck, Shinn Creek Estates, Landfall, and Treybooke. During these years Burrows and Skinner-Smith Construction worked with notable area developers such as Dallas Harris, Terry Turner, Doky Saffo, Fred Graham, Don Gilstrap, and Bill Grathwol. Some of the other significant developments he and other partners developed include Sea Watch at Kure Beach, Wrightsville Sound Office Park, Westbay, Plantation Landing and Sagewood. To this day if you are on a potential building site and are wondering where the water or sewer infrastructure is located – call Burrows because he probably installed it or knows who did.

This historical knowledge and a desire give back to the community, led to Burrows getting involved with the CFPUA when it was first created. Burrows served on the Board for almost six years and was instrumental in creating the first ever cost-sharing mechanism for the development community. The public/private aspects of this mechanism are still being used today and have helped create numerous new opportunities for the development and homebuilding enterprises in our region.

Burrows and his family owned and operated one of the area’s most notable landmarks, Dockside Restaurant for over twenty years. In 2006 they sold the restaurant and Burrows positioned himself for a much-deserved retirement. Alas, his reputation would not allow it. Early that same year, the land which is now River Bluffs was acquired by Wilmington Holding Corporation, a family-owned real estate business that has been in the Wilmington market for over sixty years. The new owners were in search of a development partner that could not only maximize the opportunity but also developed the property in such a way as to preserve the unique hardwoods, thirty-foot bluffs along the river and amazing topography that covers the three-hundred-acre project in northern New Hanover County. Burrow’s prior body of work led the property owners to realize that he was the natural choice to partner with and in 2013 River Bluffs Development Corp. was born.

Please contact Megan by email at marketing@riverbluffsliving.com for media inquiries.